The Australian Competition and Consumer Commission (ACCC) has reiterated its call for Google to implement a mandatory search engine “choice screen” as a response to Google’s monopolisation of online searches in Australia. A choice screen is a setup page that presents consumers with a selection of search engines to use, rather than sending consumers to a pre-set default search engine.

In Jul 2021 we outlined the background to Google’s Free Choice Screen, and moves in that direction in Australia.  See our previous blog post.

A report released by the ACCC in October 2021 confirms the ACCC  position that interventions are needed to address harms flowing from Google’s approximately 94% market-share of online searches in Australia.  According to the ACCC, Google gains significant value from being the default search engine for Safari, with Google estimated to receive around $8 to $12 billion per year in advertising revenue from being Safari’s default search engine, and Siri and Spotlight’s default provider for search queries on Apple devices.

The connection between the browser, search data and ad revenue is clear.

“According to the ACCC: While there are a number of factors that contribute to the quality of a search engine, click-and-query data is a critical input… In limiting rivals’ ability to reach consumers at scale, Google has ensured it maintains access to an unrivalled dataset, allowing it to continuously improve the quality of its search results in a way that its competitors cannot, and reducing the extent to which rivals are able to scale and compete against Google.

“This has flow on effects for the ability of rival search engines to monetise their services, effectively self-reinforcing Google’s dominance in search. Google’s position means it can offer greater sums to suppliers of browsers and OEMs to be the default search engine. Rivals are thereby foreclosed from accessing users and the necessary click-and-query data to improve their search engine service, further raising barriers to entry and expansion, and extending and entrenching Google’s dominance in search.” 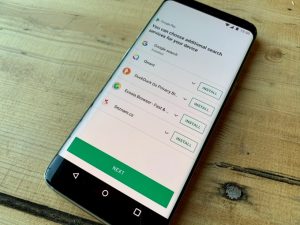 As covered in our previous post, use of choice screens is not new, with the EU implementing screen choice measures at least two years ago. However, these measures have had “limited impact,” both in terms of the level of market concentration and consumer reach, due to their design of and application only to new devices

Unlike the EU, the ACCC is recommending that the ACCC itself be given the power to “mandate, develop and implement a mandatory choice screen to improve competition and consumer choice in the supply of search engine services in Australia”.  The regulator also said the measure should initially apply to new and existing Android mobile devices (unlike the more limited approach in the EU) and across all search access points on these Android mobile devices.

The ACCC also recommended that its power should include restricting a provider, which meets pre-defined criteria, from tying or bundling search services with other goods or services.

The ACCC report is part of work ordered by the Australian government last year — when it instructed the regulator to conduct an inquiry into digital markets and report back every six months. However the final report is not due until March 2025.  So, the introduction of the free choice screen is still some way off.